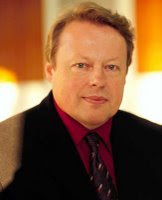 As a publisher with a long-standing interest in books on British music, we would like to join those who have expressed their shock and sadness at the sudden death of Richard Hickox. Coming so soon after Vernon Handley, music is robbed of two great conductors who weren’t afraid to stray from the well-worn path. On his Guardian blog, Tom Service writes “[His death is] a huge blow for those British composers - Rubbra, Dyson, Alwyn, Bliss - who Hickox championed but who other conductors rarely go near.”

He recorded over 300 CDs – a remarkable work rate and an indication of his passion for the repertoire – many of them for Chandos. “His long-standing relationship with the Chandos label resulted in a formidable discographical output centred on British music of the last hundred years or so: Elgar, Parry, Stanford and their many successors,” wrote Barry Millington, also in the Guardian. “Among the orchestral byways explored were William Alwyn, Malcolm Arnold, Lennox Berkeley, Frank Bridge and Edmund Rubbra, while neglected items such as George Dyson's Canterbury Pilgrims joined classics by Tippett, Walton and others from the choral repertoire.” He was also an acclaimed interpreter of Britten’s operas and the music of Ralph Vaughan Williams.

With typical eloquence, On an Overgrowth Path, writes: “He championed music that has been quite scandalously ignored by higher-profile conductors, despite its obvious merit. We have lost a truly great musical figure. Richard Hickox was a wonderful musician. But he was also prepared to devote much of his career to going where others fear to tread. That is something very rare among top conductors today. Nothing can offset the feeling of loss. But at least Richard's passion will live on in his wonderful recorded legacy.”
Posted by Boydell and Brewer at 11:09 1 comment:

, - At 3am on November 7th, a woman in , having learned that her husband was in Fuel Bar and Nightclub with another woman, came by and called him out into the parking lot, writes Ralph Locke. A quarrel erupted, she cut him in the back with a broken bottle, and he took out a gun and fired a warning shot in the air. I heard about the incident the next morning on the local TV news, and could not help but thinking that it sounded like a country-and-western song.

I was one of some two thousand musicologists and music theorists who were in that week, attending the joint annual meetings of the American Musicological Society and the Society for Music Theory. Our hotel was a short walk from , and many of us walked by Fuel at one point or another. After I heard the news about the violent episode, I asked around but was relieved not to find anybody who had been within shooting distance of Fuel (or, I really mean, being-shot distance) during the wee hours of the 7th.

Aside from newsworthy events of that sort, - the epicenter of the country-music industry, featuring dozens of high-level, if sometimes too well-fueled, clubs and bars at which an amazing array of hopeful performers strut their stuff - proved an inspired choice. We academics like to flatter ourselves as open-minded, and there are few things that can force open a music scholar’s mind with more drastic efficacy than encountering music of a sort that he or she normally can barely tolerate. True, there were some country-music aficionados among us - I know one, at least - but I imagine I was more typical.

Walking by what looked like a nineteenth-century red-brick church (because that’s what it originally was), and never having heard of this building - the Ryman Auditorium - I was surprised to hear loud chords and joyous applause coming from inside. The guard at the door gave me a ticket that I suppose had been given to her by somebody leaving early. The ticket listed the main performer as Ronnie Milsap, a name that sounded faintly familiar to me, though I wasn’t sure whether it belonged to a woman or a man.

I quickly discovered that Milsap is one of the most beloved male country-music artists and the first country superstar to have been born blind. (He has had, across his decades-long career, more number-one songs on the country chart than any performer except George Strait and Conway Twitty.) We all sat in wooden pews, and people were bringing food and drink from the concessions in the lobby into the hall, as if this were a big outdoor festival. The audience loved Milsap’s banter about his career, and they welcomed as old favorites such love-forever-lost songs as “That Girl Who Waits on Tables Used to Wait for Me at Home.”

Quite a contrast to the sessions at the scholarly conference two blocks up the hill: no shouts of love and appreciation from the floor, for one thing! To be fair, though, many of the attendees noted that there was less contentiousness during this year’s sessions than has sometimes occurred in the past. Perhaps the two societies’ program committees chose particularly well: the papers that I attended were on a very high level. But the people in the audience can take some credit, too. The discussion and debate - often plentiful - was generally carried out in a remarkably constructive spirit. Perhaps this is one of the benefits of methodological pluralism: scholars may be beginning to accept that no one approach or interpretive angle necessarily invalidates another.

A particular excitement at any scholarly meeting surrounds the exhibit of new books. The tables for the Boydell and Brewer/University of Rochester Press family of firms received many visitors and many book orders. I edit URP’s Eastman Studies in Music series, so I looked on with particular pleasure - while trying to be inconspicuous! - as visitors to the booth discovered such recent titles as Beethoven’s Century, by Hugh Macdonald, and Variations on the Canon, a book of new essays created in tribute to the great pianist and critic Charles Rosen. (I kept hearing remarks along the lines of “Look at these names: Treitler, Lockwood, Kerman, even Rosen himself…!”) The fact that the many important books published by Toccata Press are now distributed by Boydell further enriched the wares on display.

But the biggest “wows” were heard as people opened the covers of Boydell’s richly illustrated Elliott Carter: A Centennial Portrait in Letters and Documents. Carter turns 100 on 11 December 2008 and continues to compose actively. A wealth of previously unpublished documents, scores, letters and photographs in the archives of the Paul Sacher Foundation (in Basel, Switzerland) enabled the authors - Felix Meyer and Anne Shreffler - to include 90 illustrations of this material, 60 of them in color. The documents are connected by a flowing and thoughtful text: this is one picture book that can be read with pleasure and profit from beginning to end. Sometimes, at the book table, it seemed that people who picked up this inviting book could barely stop themselves from reading on and on.

And maybe that is the scholar’s equivalent of the whoops, cheers, and applause heard at country-music concerts!

Having recently published Adrian Wright’s superb biography of William Alwyn, The Innumerable Dance, we thought it might be interesting to see what Hans Keller had to say about his film music. In Film Music and Beyond, published last year by Plumbago, Keller addresses the subject of surprise and speech rhythm in The Ship that Died of Shame:

Measured against its context, the loudest shock we know is probably the one in Haydn’s “Surprise” symphony. But it does not introduce any immediate news; on the contrary, the fortissimo chord and drum tap seem but a jocular variation on the perfect cadence of the period’s first statement. “That will make the ladies jump,” was the composer’s comment.

Keller focuses on the element of surprise in the second half of Alwyn’s music for Ship, a score he found dull until a point where Richard Attenborough, the ship’s evil captain, shouts “Come on out!” to a hidden murderer he was about to help escape. His cry was the exact counterpoint, in both rhythm and intonation, of a new three note motif:

From this surprising juncture onwards the score proved novel and fascinating. Attenborough’s trisyllabic sentence was crucial from the dramatic standpoint: the ship had not behaved all too decently before, but now its real shame had begun, its doom was sealed. By acquiring the rhythm of the dialogue’s most operatic sentence, the score proved able to replace film-musical tautology by genuinely musico-dramatic interpretation.

This impressed Keller so much that he wondered if “I had not missed many a relevant point while drowsing during the first half of the score; unfortunately I had no opportunity of hearing it a second time.”

On what Peter Pears described as "the eternal struggle between song and words, sound and sense," Keller remarks:

Alwyn’s achievement, hardly imaginable outside the cinema, consists in unifying the two belligerent parties at the very stage where their differences are at their acutest, where speech remains speech and music remains wordless; and the incisive contrast between the two sharpens our wits for the understanding of new musico-dramatic unities between them…Thanks to the cinema, Alwyn has been able to go all the way, nor will his shock treatment easily wear off, for the eternal struggle between music and speech is not likely to become any less eternal in future.

We must not forget that the instrumental version of “Come on out!” is, after all, a surprise of the most genuinely artistic order, for it is a necessary consequence of the extreme contrast to whose extreme unification it draws our attention.

To read all of Keller’s essay, see Film Music and Beyond, pp.87-89. The book is available in both cloth and paperback from all good booksellers.
Posted by Boydell and Brewer at 15:37 No comments:

Paul Griffiths – music critic and historian, novelist, biographer, librettist and beyond – is about to publish a new work entitled, Let Me Tell You, a short novel using only the vocabulary allotted to Ophelia in Hamlet. This constraint, the publisher notes, gives the discourse a haunting and poetic quality. Read an extract here.

Griffiths wrote the libretto for Elliott Carter’s opera, What Next?, which had its premiere in 1999 under Daniel Barenboim. Anyone within reach of Vienna in December will be able to hear the Neue Oper version. Its composition and premiere are covered in Elliott Carter: A Centennial Portrait in Letters and Documents by Felix Meyer and Anne C Shreffler, for publication shortly.

Also from our own lists we recommend Paul Griffiths’ acclaimed biography of Jean Barraqué, The Sea on Fire, and his collection of essays, reviews and interviews, Substance of Things Heard, which includes a section on Carter and a superbly evocative piece on Canadian composer, Claude Vivier. “Griffiths writes more eloquently and with greater insight than any of his peers...Illuminating, translucent, sagacious,” said the Times Literary Supplement. We wholeheartedly agree.

Let Me Tell You is available from Reality Street Editions. The Sea on Fire and Substance of Things Heard are available from good music booksellers or from Boydell & Brewer.
Posted by Boydell and Brewer at 17:16 No comments: