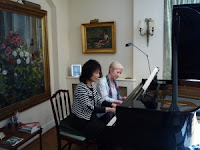 When the Japanese pianist, Noriko Ogawa, read Out of Silence by Susan Tomes, she was so impressed she decided to translate it into her own language. Earlier this week, the two pianists came together to discuss the challenges of translating a book like this into Japanese (the various nuances of ‘practice’ in Japanese, did Susan Tomes write in a woman’s voice or a man’s voice, and so on). Their meeting was recorded and broadcast by BBC Radio 4 on their Women’s Hour programme. Here, by way of a reminder, is one of Noriko Ogawa’s favourite pieces from the book. Perhaps it is a cliché to suggest that the Zen calm of this extract appealed to her.

Back in the days when I used to play for the string masterclasses at Prussia Cove, I developed the habit of going for a walk along the beach by myself after the classes to dispel the tensions of the day. My job was to play the piano for the violinists, viola players or cellists who were having a lesson. The lessons took place in front of a roomful of other gifted students and visiting teachers from all over the world, so the atmosphere was always intense and the stakes high. I wasn’t having a lesson myself, but this didn’t stop certain teachers from including me in their personal criticisms and tantrums, and I sometimes needed to remind myself afterwards that there were things in life other than music.

I walked slowly along the beach, looking for interesting stones. My method was not to look for anything consciously, but just sweep the beach with my gaze and let the stones call to me. I took them back to my room and kept them on the windowsill as talismans, though I usually liberated them back to the beach before I went home. As I walked on the beach, waiting for ‘interesting’ ones to present themselves, I realised that I was always drawn to stones which were smooth and round. This may not be most people’s idea of interesting stones, but it’s mine. I am fascinated by the thought of the multiple forces of wind and water which have to work on a rough piece of rock for years and years to convert it into something smooth and round. Such tremendous forces from so many different directions: what are the chances of them making something round? Far easier to imagine how the clash of asymmetrical forces could produce jagged, dramatic shapes with attention-seeking personalities. There were plenty of those theatrical stones on the beach, but I passed by on another track. I see the round stones as survivors of a long process of buffeting. They hold more secrets.

Out of Silence by Susan Tomes is available from all good booksellers. Her earlier book, Beyond the Notes, largely concerning her time with Domus, remains in print. Both are published by the Boydell Press.
Posted by Boydell and Brewer at 12:48 No comments: 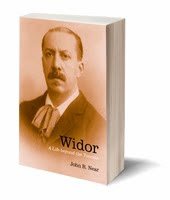 As an organist, writes John R Near, I cannot remember a time when I did not know the name Charles-Marie Widor (1844–1937), but little did I know what lay beyond that name and the ubiquitous organ Toccata—a work so famous that it virtually is the music of the organ to many who may not even know the composer’s name. I have always loved playing Widor’s organ music; I think of it not so much as music for the organ as music of the organ. It rises organically from the instrument as if born of a loving parent. For Widor, the soaring tone of the organ was a “sound singing eternity to the stars.” He once told his pupil Albert Schweitzer, “Organ playing is the manifestation of a will filled with a vision of eternity.”

Why wouldn’t I want to explore more fully the organ music of a composer with such a lofty notion of our chosen instrument? When I began my doctoral dissertation at Boston University in 1982, that was precisely my goal—nothing more. Then I began the research. I was soon overwhelmed to discover that Widor was not at all just an organist and organ composer, but rather a mainstream musician who composed in nearly every genre, and who had been a sort of cultural ambassador for France. It became clear to me that it would do Widor a grave injustice if I considered him only from the single aspect of his career as an organist, albeit legendary. I had to write a biography—a “life and works.” What began as an academic project soon became a labor of love. In hindsight, I clearly arrived at precisely the right moment, as no one was yet much interested in Widor.

Completed in July 1984, my dissertation became the first full-scale posthumous biography of Widor in any language. Although it encompassed his entire work, it naturally highlighted his career as an organist and organ composer, and I felt certain that if there were to be a resurgence of interest in Widor’s music, it would be through the organ works. I decided I had to continue my research, and the study of Widor became a kind of mission. I had become quite aware that the composition and publication history of Widor’s organ works was knotty at best, and that a critical edition of the ten organ symphonies was sorely needed. I put that as a priority, but I had no idea how complex the puzzle would be. It required ten years, 1987–97, to research and to publish my edition with A-R Editions.

Just when I thought I might start this biography in earnest, it was proposed that the Philadelphia Orchestra would perform Widor’s Symphony in G Minor for Organ and Orchestra in 2002, but with the stipulation that it had to be published. They had last performed the work from manuscript copies in 1919! The biography had to be put off as I undertook the research to publish a critical edition of the Symphony, again with A-R Editions. In retrospect, I can see how the twenty intervening years between my dissertation and the beginning of the present book only prepared me better to reach the summit of this biographical Everest.

I have always thought it surprising that there were only a couple of fairly extended biographical studies of Widor during his lifetime. Although I had my doctoral research to build on, I was forced to mine original source materials, almost entirely in French. Over two decades, I collected a great deal of new material that I had not yet fully digested—countless letters, reviews, articles, news clippings, and a cache of material in the possession of Widor’s grandniece, whom I found in 1988. Perhaps the most extraordinary of the treasures that tumbled out of her huge armoire, was the 103-page manuscript of Widor’s “Souvenirs autobiographiques” that he was dictating in his ninety-first year. It required several visits to her home over a period of years to plumb the depths of those holdings as well as the memories of family members who as youngsters had known “Uncle Charles.”

Born during the reign of Louis-Philippe, Widor endured more transitions in French government, wars, crises, and changes in the social fabric than perhaps any other musician. In this biography I have wanted as much as possible to let him tell his own story, either through his prolific writings or the recollections of friends, students, and admirers. His descriptions of backdoor intrigues in Conservatory politics, bureaucratic infightings, professional jealousies, and survival during the Franco-Prussian and First World Wars propel his life’s story with historical relevance, passion, insight, and wit. In addition, critical reviews have been drawn upon liberally, as they were an invaluable resource for piecing together the composite picture of Widor’s lengthy professional career and the critical reception of his works. Most of this material appears in English translation for the first time.

In Widor: A Life beyond the Toccata, the reader may be astounded to discover a musician of amazingly diverse accomplishments: organist, composer, Paris Conservatory professor, member of the Institute of France, leader in the French Bach revival, co-founder and first director of the American Conservatory at Fontainebleau, journalist, conductor, music editor, scholar, correspondent, inspired visionary, and man of deep culture. Widor was well connected in social and professional circles; he seems to have known nearly everyone who counted. Living to become an icon in French music and his country’s cultural emissary, Widor also reigned for sixty-four years over the largest instrument in France at the Paris church of Saint-Sulpice where the elite of society, musicians, artists, litterateurs, scientists, politicians, and nobility flocked to his organ gallery. Far from being cloistered in that organ gallery, however, Widor is seen in this biography as a man of mainstream intellectual and artistic achievement.

Adolphe Boschot, Widor’s successor as perpetual secretary of the Academy of Fine Arts wrote: “By his ever-generous narratives, he taught us to direct our attention not to the shadows, but rather toward the bright side of things—not to the inevitable pettinesses of men or the disillusions that events sometimes carry, but rather toward the beautiful works and the good deeds that enrich our intellectual and moral heritage.” Through his talent, indefatigable industry, and humanity, Widor left a wealth of beautiful works and the example of a life lived with grace and rich in good deeds. In his final days he reminisced, “I have had a beautiful life.” For what he left us, we are the lucky ones.

Widor: A Life beyond the Toccata by John R Near is available now from the University of Rochester Press or your favourite bookseller. It includes the most complete listing ever compiled of Widor's oeuvre.
Posted by Boydell and Brewer at 16:32 No comments: