The Wholeness of Dane Rudhyar

Lurking on the edges of many histories of American music, Dane Rudhyar (1895-1985) was actually born and educated in France as Daniel Chennevière. Under his birth-name, at the age of eighteen, he wrote one of the earliest extended studies of the music of Debussy, while the latter was still alive and composing. He moved to the United States in 1916 and a few years later became an active member of the “Ultramodern” group of composers, his music performed in concerts that also featured new works by young firebrands such as Aaron Copland, Henry Cowell and Ruth Crawford Seeger. He painted intensely colorful semi-geometric canvases, wrote essays and poetry, and became a much-published authority on astrology. The University of Rochester Press has recently published the first comprehensively researched book on him. Here the book’s author, Deniz Ertan, explains how she developed an interest in Rudhyar.

Why was I - a young Turkish musicologist studying in England back in the 1990s - drawn to the world of Dane Rudhyar? I didn’t quite “get” the music of this French-born composer who moved to the United States in his early twenties: I was unable to follow a large part of his ideas and I never had any interest in astrology. But I had always been intrigued by relationships, interpenetrations and interplays (of the one and the many, part and whole, unity and multiplicity). After all, I was also a synthesis of my own different backgrounds and worldviews - I knew I had to take up the Rudhyar quest.

It did not take very long before I realized that Dane Rudhyar was not just another composer. Nor was he just another astrologer, nor just a painter, poet, philosopher, novelist, music critic - the list of his activities kept growing. Soon after I plunged into Rudhyar’s irresistible universe, I was granted immediate access to a totality of vision and a fascinating body of creative work. Hence began my own journey through some of his main ideas and themes: crisis, death, rebirth, growth, Wholeness. I’m not being ostentatious or sentimental, but on a personal level, this past decade with Rudhyar has been an intensely cathartic learning process for me. Undergoing a major illness, many months of life-threatening treatments, and the death of three loved ones, I continue to be nurtured by Rudhyar, as if he is holding my hand.

On a scholarly level, I first became interested in Rudhyar when I was carrying out research on Carl Ruggles as a postgraduate student at University of Manchester. I found the intensity of their friendship, which was instantly evident through their correspondence, deeply moving and arresting. This was my first “Aha!” moment. I then came to know their compositions, writings, and concepts, and felt a breath of fresh air in the power of their - often quasi-religious - ideals as a generation of American “ultramoderns”. In 1997, when I first looked up Rudhyar in Grove, I found the entry hopelessly inadequate. Why, I wondered, was one of America’s early visionary composers neglected and misrepresented to such a degree? And how did he manage to do “all that” in a lifetime marked by ongoing poverty, illness, and musical isolation? I knew that a book about Rudhyar and his creative output was needed.

Very soon I was swimming in the unsettled ocean of his words, ideas, tones, colors, shapes, cycles and lines. Serendipity kicked in quickly, playing its (more than usual) wonderful part. First, I found three Rudhyar scores at our university’s library. Then Patana Usuni - a devoted, altruistic advocate of Rudhyar’s astrological and philosophical work - opened wide his own Rudhyar window through correspondence. And dear Betty Freeman - the extraordinary arts patron who sadly passed away only a few days before this book’s publication - put me in touch with another kindred spirit, Bob Gilmore. Before long Bob and I were at the San Francisco doorstep of Rudhyar’s widow, Leyla Rudhyar Hill, and his last personal assistant, Joseph Jacobs, who together kindly admitted us into the Rudhyar archive and guided our explorations.

Although the book is now completed, I feel there are still many questions unanswered, untackled. I hope that it presents a vivid portrait of Rudhyar within the cultural, intellectual, and philosophical life of twentieth-century Western world, contributing toward the process of his demystification. To trace the ninety years of his existence and evolution of thought and work has been a challenging but most rewarding journey, with invaluable insights into the cyclic ascents and descents of Europe, America, and (as known or imagined by Europe and America) “the Orient.” One of the key questions throughout the study has been how these worlds appeared and changed under Rudhyar’s French-American questing eyes.

Since the book has been released in a historic week (when Barack Obama was inaugurated as president of the United States), I cannot help but remember two things about Rudhyar: his own amazement at how the most important events of his life coincided with world events, especially those in America; and how deeply the voice of Martin Luther King, Jr., moved him. Dane Rudhyar: His Music, Thought, and Art is a modest tribute to a unique cultural polymath, a transpersonal thinker, and above all, a fascinating composer-painter-poet persona.

Dane Rudhyar: His Music, Thought, and Art by Deniz Ertan (University of Rochester Press) is available from all good bookshops.
Posted by Boydell and Brewer at 15:25 No comments:

“Meat for the Cultured Few” 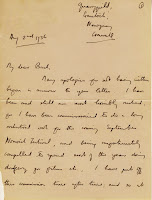 There are around 80,000 pieces of correspondence in the Britten-Pears Foundation archives – together with notebooks, diaries and nearly all of the composer’s music manuscripts – carefully preserved for scholars and researchers in Britten’s final home, the Red House, Aldeburgh. The addition of another one to this impressive collection would hardly seem worth mentioning, yet this newly-acquired letter from Britten to the composer Alan Bush – dating from August 1936 – reveals the 22 year old composer striving to find a modern musical language that audiences would understand.

In a fascinating new online publication, News from the Red House, Chris Grogan outlines the significance of the letter:

The composer Alan Bush was preparing some lectures on English music and had written to ask Britten, an exciting newcomer on the scene, for his opinions.

I am at the moment going through a species of mental spring-cleaning. One arrives at a time of life, I feel, in which after a certain success a decision must be faced.

Discovering Mahler, a growing appreciation of Beethoven, and hearing ‘too much contemporary music’ had left the young composer at a ‘mental crossroads’:

I feel the scope of music has suddenly become too narrow – well, the last 50 years. Too introspective – too self-consciously original. Every Tom, Dick or Harry in the musical world, who tries to compose, labours to find some watertight ‘style’ – composed of little mannerisms and idiosyncrasies. Every great composer naturally has his personal style – but it is not necessarily obvious at a first glance. It is the composer’s right, I feel, to use any manner, of any composer or period…If he is worth his salt he will endow it with his own personality and style – if he isn’t, well, it doesn’t much matter, but the piece stands a chance of being listenable-to! Every BBC or contemporary music concert I go to emphasizes this point – and it is the reason why modern music has become the meat for only the cultured few.

For more Britten letters covering a later period including the composition of The Turn of the Screw and The Prince of the Pagodas, look here. Chris Grogan is Head of Collections and Heritage at the BPF and editor of the acclaimed Imogen Holst: A Life in Music.

Posted by Boydell and Brewer at 11:50 No comments:

The latest edition of Boosey and Hawkes’ trade newsletter, Quarternotes, contains a fascinating short interview with Viennese composer, Kurt Schwertsik. Asked why he favours the fleeting, everyday ‘music in the air,’ Schwertsik replies:

When I was searching for a basic strategy as an artist, John Cage was very important to me. He described how you could listen to everyday sounds – in the street, in nature, in conversations. I agree with Cage that we are people that live in the air…At Darmstadt I liked his Zen-inspired spiritual view…he reinvigorated my interest in the Dada movement.

Schwertsik is also one of the interviewees in Peter Dickinson’s acclaimed, CageTalk. There he describes his encounters with Cage at Darmstadt more fully:

He gave three lectures, including the “Lecture on Nothing” where he has those beautiful pauses. And he gave another lecture during which he lit cigarettes. Each one was somehow handled differently – smoked once, twice, not at all, or smoked to the butt.

Schwertsik goes on to describe Cage’s use of the I Ching in composing Music for Piano:

People were very upset. I remember Ligeti asking him if he would use chance operations and then select something that pleased him. He mentioned Kurt Schwitters, who used to look at the landscape through a little frame and then say, “Oh look, this is typical Schwitters!” He thought Cage might have been involved in an objet trouvé venture, which was not true – obviously.

Schwertsik was ostracized by Darmstadt as, under Cage's influence, he moved towards Dada:

I believe the function of art is to denounce seriousness. It should be fun. There’s a halo of awe around modern music. You achieve more if you’re not serious.

Hence, perhaps, the title of his 2007 composition for trumpet and orchestra, Divertimento Macchiato. “After the premiere,” he explains in Quarternotes, “my wife Christa suggested adding Macchiato to the title and this seemed perfect to me, as it captured an ironic image of modern so-called ‘designer coffee’ – more Starbucks than Old Vienna.”

Perhaps too it is fittingly Schwertsikian that he is incorrectly described as deceased in the second edition of Grove.

Divertimento Macchiato can be heard as part of the Royal Scottish National Orchestra’s Scottish tour in April 2009, and his latest work, a ballet entitled Kafka Amerika, will be premiered in Linz in the autumn. CageTalk: Dialogues with and about John Cage, edited by Peter Dickinson, is available from all good booksellers.
Posted by Boydell and Brewer at 14:07 No comments: