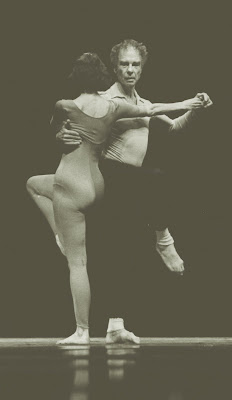 Surely any time traveller with an interest in the arts would want to touch down at the Black Mountain College in the ‘forties and ‘fifties. Who could resist painting with Willem de Kooning, discussing poetry with Jonathan Williams or building a geodesic dome with Buckminster Fuller? Had you been there in 1952 you might have witnessed, arguably, the first 'Happening' featuring John Cage and Merce Cunningham, who died last month. Here, by way of a tribute to the great dancer and choreographer, we post a short excerpt from Peter Dickinson’s interview with Cunningham, to be found in CageTalk published by the University of Rochester Press:

PD Do you actually use the I Ching?

MC I have used it in several dances. I could use it in all of them: sometimes because of practical necessities, such as the amount of time I have to make something, [laughs] I have to employ simpler ways like using coins. It’s the element of chance bringing up something my own experience might not produce. Even though I have made the movements that will be utilized in the dance, I use chance operations to devise the continuity so that what comes after what can be a new experience.

PD Wasn’t it when Christian Wolff’s father published the I Ching that it became a great discovery for John?

MC I don’t remember the exact moment. It must have been Christian Wolff who brought the book, and I remember very strongly the impression he [Cage] had of reading the preface where Jung asks the I Ching what it thought of being published in a different language. The answer was so extraordinary . . . I remember John being absolutely amazed. My own experience about it was that the book is so vast and the kind of thing it allows for is so open that if you asked it a question, the answers were always pertinent. Then I began to see that the numbers themselves—not what they represented in terms of hexagrams—could be used for my purpose. It was around that time that I began thinking much about space and dancing. I’d been taught that in dance there was the proscenium stage and there was a center of interest at the center of the stage, the most important part of the space. Even before the I Ching, that didn’t make sense to me. I didn’t have any other answer, I admit. Then I happened to read this quotation of Einstein’s where he said there are no fixed points in space. I thought that was perfect for the stage, and there’s no point that’s any more important than any other. In that sense it’s Buddhist or Zen. Any point could be important. Wherever anybody was, was in that sense a center. So I began to explore that by taking pieces of plain white paper and marking the imperfections, then drawing lines from one to the other; then taking another sheet of paper and drawing more lines because the imperfections are always different. Then I would superimpose them so that each sheet [represented a single] dancer’s space track. Where those [tracks] happened to coincide they could do something together. That eradicated anything about the center of the stage: it didn’t exist anymore. I thought that was wonderful! [laughs] Then I also found it was possible to make dances where the audience was all the way around you. One of the very first ones, called Suite by Chance, was done that way, and we presented it at Black Mountain College that summer - we were there with the audience all the way around us.

PD Did you find that you and John dominated the scene there?

MC Oh no, not at all. . . . First of all, from a practical and personal point of view, it was wonderful for me. I was there several summers, actually. The first summer John and I were there with Buckminster Fuller, Elaine and Bill de Kooning, and Albers, of course. What was so amazing was that, in spite of inadequate facilities for dancing, it was still made possible for me to work. The dining hall was the only big space they had, and they’d simply clear it every day. It was a community where the pupils and the teachers had a sense of interacting. You all ate at the same dining room and sat at different tables each day with different people, always having a crossing of ideas, listening to something totally out of the realm of dancing. As far as I was concerned it was marvellous to get out of it for a while. You could not only hear about something different, but it could make you change your ideas.

PD You took part in the happening at Black Mountain College in 1952. What was it like?

MC I don’t know in detail what the others did. There were about five or six of us—Bob Rauschenberg, John, David Tudor, myself, I think M. C. Richards and maybe another person. I’m sure John has described this, but we each simply did what we did. That is, I danced around through the public, which sat in the center with aisles between. It was a kind of agreed-upon length of time during which these things would take place. There was no connection other than what anybody looking at this could make. All these things were separate, and everybody was sitting facing a different way so that they would see or hear something in a different way. It wasn’t all fixed so that everybody was to look at it one way. At the end of it they brought out coffee or something! [laughs]

PD Did it feel like something that would have reverberations right through the 1960s?

MC No. And it didn’t have a name. It was just something we did. Later they called them happenings. It was an idea about theater that John had — that anything could be theater. It can, depending on how you act or think about it. It doesn’t have to have a reference, a meaning, or a connection. It can simply take place.

PD John’s ideas open up the skies, don’t they?

MC Yes, a large mind open to so many kinds of things. His reactions to things have often been so amazing to me.

CageTalk: Dialogues with and about John Cage edited by Peter Dickinson (‘The ideal introduction to Cage’ Times Literary Supplement) is available from all good booksellers. The photograph of Merce Cunningham with an unidentified dancer in Roaratorio (1983) is reproduced in the book courtesy of the John Cage Trust.
Posted by Boydell and Brewer at 14:14